That They May Be One

Posted on October 27, 2018 by veilofveronica 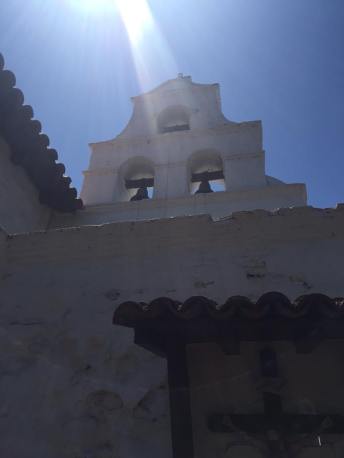 I pray that they will all be one, just as you and I are one–as you are in me, Father, and I am in you. And may they be in us so that the world will believe you sent me. John 17:21

The verse above is the universally known verse of Christian unity.  It has been the call to the ecumenical movement and to uniting denominations.

But as I sit here typing at 3:30 a.m. because the Lord awakened me, I know there is another meaning behind this verse, it isn’t just about Christian unity.

Jesus Christ wants me, Susan, and each of YOU individually, to be one with the Father through Jesus as an action of the Holy Spirit.  This is what it means to be a living sanctuary.  This, and only this, is what will lead to a true Christian unity and peace in the world. And this, this way of living begins in prayer, not in works.  And through prayer we unite to God by receiving the Sacraments.  These two things bring true unity.  Your unity with God.  No amount of ecumenical gathering will achieve the kind of unity and peace that God seeks for us until each one of us personally becomes one with the Father through Jesus Christ, resting in the Father’s bosom, resting in His love.  The result of this kind of unity, the union of an individual with the will of God, is works, works born of love and not of some false facade of what we limited human beings think of as peace.

You see Jesus didn’t speak one word about humankind. A true believer didn’t come from giant speeches, for many heard Him speak, but didn’t stay transformed.  What we see over and over again in the Gospels is that he had a one on one personal encounter with individuals who became transformed.  He KNEW them, and they KNEW HIM.  They probably felt, for the first time ever that they personally were loved unconditionally.  This is why they changed and left their life of sin behind.  It wasn’t because of a giant speech and platitudes about world peace.  It was because of an encounter.  And encounter with LOVE HIMSELF.  One, who through Him, showed us a Good Father. And it is why it was better if Judas had never been born, because he was given the encounter and he betrayed and in his betrayal he rejected the encounter.  He didn’t rest in God’s love for Him.  That’s the difference between Peter and Judas.  Peter, even in his denial, he knew God’s love for him.  It’s why he could repent.  Judas blasphemed by rejecting the mercy of God.

Jesus was each persons best friend.  The one who in return really “got this” was John.

The Gospel tells us of Jesus, “No one has seen God at any time; the only begotten God who is in the bosom of the Father, He has explained Him.” (John 1:18)  And later, at the Last Supper, the Gospel tells us, “There was reclining on Jesus’ bosom one of His disciples, whom Jesus loved.” (John 13:23)

This is why John could stand at the foot of the cross.  When Jesus gave us his Mother (John 19:26-27), he also was showing us how to be sons and daughters through the example of John.

Have you had this encounter?  It’s all throughout the Gospels.  The Samaritan women at the well, Zaccheaus, the adulterous woman, each of the Apostles, Martha, Lazarus and Mary.  The list goes on.   We the Mystical Body of Christ, as individual members can bring this encounter to others, with Jesus acting through us, one to one.  This is how to make disciples of all nations, one on one encounter.  Bring Christ to the people.

This is why when Christ comes to you in an encounter it is so important to be OBEDIENT.  This obedience brings the oneness with the Father that was broken by the disobedience of Adam and Eve.  Being obedient is hard, it makes you different from others who may persecute you for it.  But it is in this obedience that grace abounds.  This obedience will help spread the Gospel and achieve true Christian unity.  A person who lives here can love like God does.  God loves unconditionally.  When you rest here you are able to fight the devil by hating him, but not a person.  It enables forgiveness.  You can see the world through spiritual eyes.

When I was in Medjugorje I encountered the 73 year old patriarch of the family that owned our hotel.  He had lived through communism and the war between Croatia, Bosnia and Serbia.  You would think war would have made him bitter, but this man was different.  He had something I hadn’t seen much of before.  He had true peace, true love, and true freedom.  He relayed to us a story about the parish Priest, Father Jozo Zovko, who was imprisoned by the communists for speaking against the state.  This man had witnessed and been part of the trial, which was a farce.  He said he told what was true, but the communists had a predetermined outcome because of their ideology.  Then he said something I will never forget.  He said, “they can put you in prison, but you can still be free.”  This man KNEW GOD.  Because freedom is interior, and it comes when you rest in the bosom of the Father.

Don’t fall for false unity that comes at the expense of Truth.  Be obedient and remember unity starts with your union to the will of the Father.  Rest in the Divine Will.  Peace will be the result, even if there’s a storm around you.

I am a mother and wife as well as an RCIA and Adult Faith Formation catechist at a parish in the south. I have 3 children and a great husband.
View all posts by veilofveronica →
This entry was posted in Catholic and tagged Blessed mother, Christian Unity, Divine Will, Jesus, John the Evangelist, Obedience. Bookmark the permalink.

8 Responses to That They May Be One