Posted on November 8, 2018 by veilofveronica 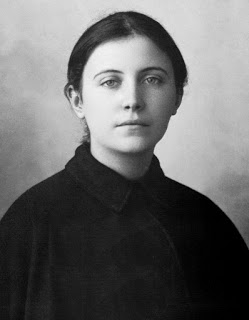 “I am happy in every way that Jesus wills, and if Jesus wants the sacrifice of my life, I give it to Him at once. If He wants anything else, I am ready. One thing alone is enough for me; to be his victim, in order to atone for my innumerable sins, and if possible, for those of the whole world.”  Saint Gemma Galgani

I went to a wonderful conference on healing this past weekend.  It was very grace filled.  The lay minister who ran the event was filled with the Spirit and proclaimed the Gospel with boldness.  He stated, God is good and he wills for us to be healed.  I believe all of this.  He spoke of Redemptive Suffering and said when we suffer we should unite it to the cross, but that God does not will suffering.  This is all true.  But as the conference came to a close I asked him about Victim Souls.  He said that the theology of the Victim Soul is not Doctrinal, but private revelation and he does not believe it.  He believes God wants all of us healthy.  It is true that it is not Doctrinal.  It is true that we are free to believe or not believe.  It is true that God wants all of us healthy.  But it is also true that we are not all healthy, and that sin still abounds in the world.  I couldn’t get past the fact that virtually every Mystic Saint was a victim soul, or that God spoke to them about it.

When I got home, my friend Rob Marco had posted something about Suffering And The Divine Will.  In it he tells a story that says;

A client of St. Thomas Becket went to the saint’s tomb to pray for a cure for his sickness, and he was indeed cured. But upon returning home he thought to himself, “Suppose it would be better for my soul’s salvation if I remained sick, what point then is there in being well?” So he returned to the saint’s tomb and asked for St. Thomas’ intercession again but with a different request: that God would grant him what would be best for his eternal salvation. His illness returned, and it was reported that the client was perfectly content, convinced that God had disposed of him for his own good.

This got me pondering all that had happened over the weekend, and all that I had read from Robs post.  As with most things I took it to prayer and then recorded what I felt God speak to me in my journal.  Here is what I wrote;

I will for health of all people.  I want for that.  And I will give it to those who ask.  But I want to speak to you about victim souls.  These are souls who are called and set apart by great grace.  They actually don’t look to sickness or suffering as a matter of a lack of faith on their part or as a matter of them doing something wrong.  Their goal is a total detachment from sin.  They are engaging in the highest level of battle with the devil.  They have taken on my enemy with full force.  They know suffering is for their soul’s purification on earth.  It purges them of sin.  They are intensely fighting the devil who is the one who brings suffering, the one who tries to destroy the body.  The goal of these souls is not health, but detachment from the world and attachment to me so their acceptance of suffering actually defeats the devil.  Their want of me outweighed any want of earthly comfort.  They emulate the sacrifice on the cross.  Few are chosen for this grace poured down.  Their sacrifice “makes up for what is lacking in the afflictions of Me, for the sake of My Body.”  Though I lack nothing, my Mystical Body does because of sin.  I came to destroy the works of the devil, which is sin.  Yet sin still abounds, but grace abounds more.  And the few chosen souls rise up in this grace.  This can be likened to when the hand of  the body places a toxin in it’s mouth, the kidney will root out that toxin.  The kidney, which receives life from the heart and the head, are helping to purifying what the mouth and hand have done.  This sacrifice of this one part of the body is turned to grace which is used to grant a loud voice to the Communion of Saints so the mouth and hand, which believed the toxin to be a good, can hear instead the voice of love, sacrifice and mercy at their time of judgement.  It is the ultimate intercession.  It is the way that I, the head and the heart, bring unity to the whole body.  And the voice of blasphemy, which is the devil, is defeated, by the working of the body with the head and the heart.  When My Will is done on earth as it is in heaven, all will be healthy.  Many are called.  Few are chosen.  Do not be afraid.

We can all unite suffering to the Cross and we don’t need to go looking for suffering, but there are a few who walk so closely in union with God, that they take on His Cross.  This is how I view the Mystics.  They know God Alone is good, and all healing comes from Him.  As an act of their will they surrender to God whatever He asks for out of love of Christ and His Mystical body, knowing His plan is better.  I believe wholeheartedly God wants us well, He never intended for suffering, but it was free will that brought it to the world. I also believe we should ask to be well and seek healing from the King of Kings. But, I also think we should seek God first, above all, even before we seek healing. We let God decide how best to purify our souls. For most, healing lights them so on fire for Christ that it purifies them more than anything else would, we see this in the healing stories in the Gospel. For others, I believe they are victim souls.   For all, I believe the conversation with God should guide each soul and each soul should act in obedience. Taking on suffering when he hasn’t called you to is actually an act of pride putting yourself above God.  Let God guide you.  God is often a paradox, and His ways are not our ways.

*** I write in my journal as if God is speaking to me, what I believe the Lord is saying to me.  My spiritual director said I can do this as long as it doesn’t stray from Scripture or the Magisterium.  It is obviously filtered through my human intellect.  I cannot know the mind of God, but I do know He is calling us to total and complete trust.

I am a mother and wife as well as an RCIA and Adult Faith Formation catechist at a parish in the south. I have 3 children and a great husband.
View all posts by veilofveronica →
This entry was posted in Catholic and tagged Life, Mystic Saint, redemptive suffering, Victim Souls. Bookmark the permalink.