Be a living Sanctuary – A Pilgrims Story

Posted on October 10, 2018 by veilofveronica

“if I am delayed, you will know how people ought to conduct themselves in God’s household, which is the church of the living God, the pillar and foundation of the truth.” 1 Timothy 3:15

I made my first pilgrimage ever.  I took a trip to Medjugorje, Bosnia – Herzegovina.   This is a place of alleged apparitions of Our Lady.   The Vatican has assigned a Papal Envoy with Archbishop Hoser as the head of the envoy, and with this Medjugorje is expanding.

I will stop here for a moment to give my thoughts on Medjugorje, as I know some find this to be a controversial place, this will be my only comment about it because in the end, if it is authentic, I have no need to defend it, God’s truth always wins.   And whatever that truth may be, as revealed through God’s church, I will accept it.

I have read both pros and cons about Medjugorje and conflicting reports about all that has gone on there.  Many others have already written about this.   The appointment of the Papal Envoy lends validity at the very least to the place as a shrine.

As for me, in my prayer, God tells me it is authentic.  He tells me though, because of us and our sinful ways, it comes with all the muck of our modern era attached to it.  By that I mean, whenever something great and Godly is happening, you can also count on people bringing their own mess to it.  And you can count on Satan to attack it.  There are several reasons I believe it is authentic. The first is because of the vocations to the Priesthood that I have personally seen come out of there.  The priests who found their calling from there are numerous, and most telling is their acceptance of authentic Catholic Truth.  Including the fact that they all say they would accept whatever the Vatican decides about the place.  If there is one thing I know, the devil does not want Priests.  The devil is not going to be sending Priests out in the world who preach authentic Catholic Truth.  On this alone, I can conclude something wonderful is happening there.   And the devil will fight very hard to bring those Priests down in a particularly harsh way, which is why we need to pray for them so much.  Second, the main message of Medjugorje (and from Our Lady) are these 5 things, called the 5 stones;

So with all this in mind, I began my pilgrimage to Medjurgorje with an open heart and an open mind.  It was my first time ever on and International flight (unless my honeymoon to Mexico counted, back when you didn’t need a passport to travel to Mexico.)  I have to say, I used to suffer from great anxiety travelling.  You can read about my anxiety, here and here.  My anxiety about things would sometimes get to the point I cry and break down.  But in my journey with God, He has slowly and gently walked me to a place of freedom.  I had absolutely no anxiety at all about this trip.  And I am telling you, that is a miracle.

It took over 24 hours to get there and we arrived late in the evening, after having to spend much of the trip surrendering to God the travels delays.  We stayed at a lovely hotel that was owned by the family of a locutionist who have also a winery.  It was called the Cesaria Wine Hotel.

The first thing I noticed about the place is the hospitality and the slower pace of life.  Phones put away, and relationships nurtured.  A glass of wine, and a conversation.  We had about 28 people on our Pilgrimage including our Priest and tour Guide.

Most were from one parish in our Diocese, with a few others of us sprinkled in.  I really didn’t know the people well, but by the time I left, they were friends.

My first day there started with Mass.  English Mass at 10:00 a.m.  This is something that you just go to every morning.  It isn’t a question.  Mass is so packed that it overflows outside.  In the evening is International Mass and it is a sight to behold;

The church of Saint James – Patron of Pilgrims built in 1968 – years prior to the 1981 apparition beginnings.  No one knew why they built such a large church for such a small town, or why they named it Saint James- no one but God.

It actually took my breath away to see this many people going to Mass, a daily Mass at that.  There were, Croations, Italians, Africans, Polish, Americans, Irish, British, Indian, Canadian, German, Chinese, I could go on… I mean it was breath taking.  All there to worship God in the Mass.  The homilies were all powerful and packed with truths that most American Priests don’t speak of (with the exception of a few I know.)

The lines for confession were long.  The Adoration Chapel was packed.  This is how we should all be living.  This is how the Mother of God calls us to deep contemplative prayer and worship of her Son.  Why in the world are the rest of us not living like this?  It was common place to see people walking and reciting the Rosary.  I could listen to the Croatian Rosary and respond in English.  It was a vision of the Mystical Body of Christ.

October 2 was the day of the apparition.  I will pause here for a moment to say this, Mary’s appearance in anyplace has always been a call towards her Son.  Though I of course wanted to be there for the apparition, it was the sight of the people praying in unison that captivated me the most.  At the precise time of the apparition, for me interiorly, God impressed upon my heart to pray for specific people and their mission.  We each have a purpose and mission in life, and when ordered towards God, we experience joy and a fire in our hearts.  He impressed upon me to pray for this for some very particular people, who I believe will help change the world for the better.

My view at apparition time

The biggest impression of all was made upon me by the faith of the people who lived there.  They are just one generation away from communism.  Their parish Priest was jailed and tortured.  The Franciscans were martyred nearby, each holding the Cross proclaiming their love for Christ as the communists murdered them one by one and threw their bodies into a cave and burned them.  The people woke to murdered Priests.  The pain was great, but the faith is authentic and unmistakable.

The Franciscan Monastery of Siroki Brijeg 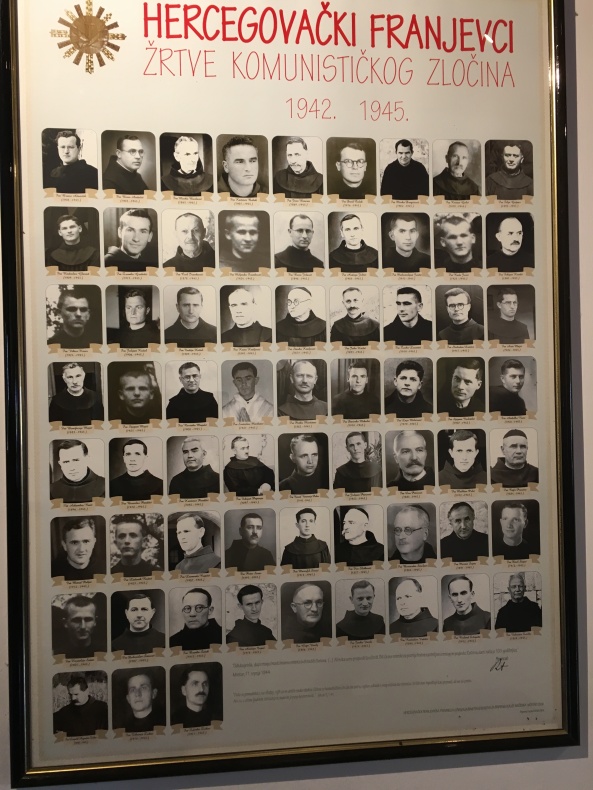 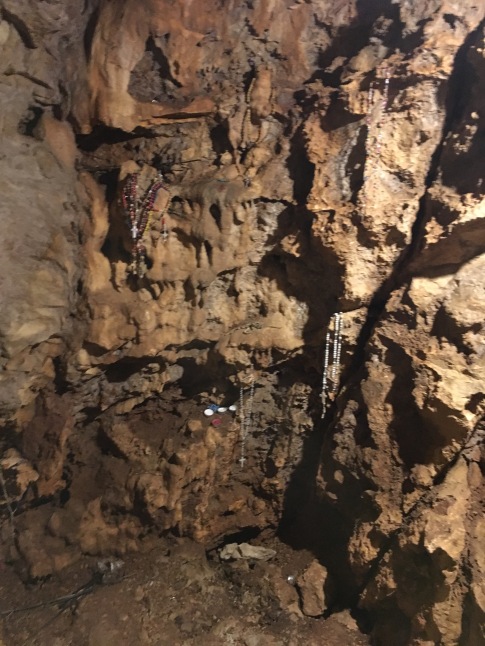 I think the thing that was impressed upon me so greatly after listening to these stories, is actually how sad I am to see similar things happening in America.  Communism is evil.  The level of vitriol being spewed out is reaching a high level.  We should all be actively praying for the conversion of  America and of the world.

As for my personal journey, this was a place of healing for me.  When I climbed apparition hill, though I didn’t let anyone know at the time, I cried.  I cried about my journey to cling to my faith and about how all of that was preparation for the times we are living in now in the church.  I know it is through forgiveness and the Sacramental Life that we are free.

At the top of Apparition Hill

I had two very profound moments I will speak of.  The first happened on October 2.  I have felt the Lord lately tell me to “pay attention to the Dogs.”  Yes, the dogs.  I know that is strange but it is what he said.  I went to confession and was finishing up my Penance when a dog walked past.  The Lord told me to follow him, so I did.  The dog took me to the middle of the field, where I saw the sun dance.  It had a large white host in the center of it.  And it danced a blazing pink, the color of joy.  I posted the photo at the top which doesn’t show what I saw, but does show an expanding sun.  This is known as the miracle of the sun, and many have experienced this in Medjugorje.  Later when I looked at the cross on top of the mountain, it was also pink.  I will only say this, it was joyful to be there because many things I have received in prayer seemed to come together in this place and start to make sense.

The second moment was in climbing Cross Mountain and doing the Way of the Cross.  I got to the sixth station, Veronica wipes the face of Jesus, and I recalled how my journey of faith really began with the murder of my friend Veronica.

I prayed for her and I wept, again, hiding it from everyone.  And I thanked God for the good He brought from such evil circumstances.

Veronica Wipes the Face of Jesus

I laid the intentions everyone gave me at the Foot of the Cross.

The Cross on Krizevac in Medjugorje, marked “33-1933.” Built in 1933, to honor the 1900th anniversary of the death and resurrection of Jesus who died on the cross at age 33. It commemorates 1900 years. The cross was placed there long before apparitions and served as a beacon of hope during their oppression from communism.

And I prayed very specifically for someone the whole way and after that I saw this on the way down even though it was a sunny day;

In the end, the message I have felt the Lord tell me over and over has been reinforced.  While Rome burns, Medjugorje’s message is clear. It is the age old message of the church. Do God’s will.  Live the Sacramental Life. Be a living sanctuary.  Live in the Peace that surpasses all understanding. 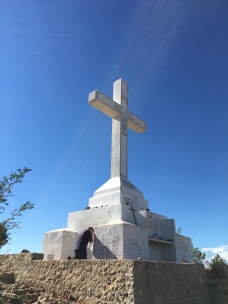 May the God of hope fill you with all joy and peace as you trust in him, so that you may overflow with hope by the power of the Holy Spirit. Romans 15:13

I am a mother and wife as well as an RCIA and Adult Faith Formation catechist at a parish in the south. I have 3 children and a great husband.
View all posts by veilofveronica →
This entry was posted in Catholic and tagged Blessed mother, Confession, Eucharist, Faith, Martyrs, Medjugorje. Bookmark the permalink.

26 Responses to Be a living Sanctuary – A Pilgrims Story