Build me a Temple

Posted on August 2, 2020 by veilofveronica

Shrine of the Most Blessed Sacrament, Hanceville, Alabama

The evil of which Christians will render themselves guilty by persecuting the Holy Church, will bring her honor, light and the perfume of virtues. After the tribulation and distresses, God, through a means unforeseen by men, will purify His Holy Church, and renew the spirit of His elect. Such a reformation of the church of God and such a renovation of holy pastors shall ensue that the sole thought of it makes my spirit exalt in the Lord. The spouse of Christ is now, as it were, disfigured and clothed in rags, but then she shall be resplendent in beauty: she will appear adorned with precious jewels and crowned with a diadem of all the virtues. All the faithful people will rejoice to see her endowed with such holy pastors. As for the unbelieving nations, they will be attracted by the good odor of Jesus Christ; they will return to the fold of Catholicity; they will be converted to the true Pastor and Bishop of their souls. Return, then, thanksgiving to the Lord, because after the tempest He will give to his church peace and joy which shall be extraordinary. – Saint Catherine of Siena (1347-1380) from the book by her Spiritual Director Blessed Raymond Capua – The Life of Saint Catherine of Siena.

I came across the quote above from Saint Catherine of Siena the other day.  It’s hard to believe she wrote that in the 1300’s, hundreds of years before the Reformation, and before our modern day scandals in the church.  I knew her prophetic words to be true and it gave me great hope.  A church resplendent in beauty and holy pastors.  I also know here we are some 600 years later and her vision of the church has still not come to fruition.  Christ’s bride is still disfigured and in rags, more so than it was even in her day.

I had been feeling the need to have a respite of late.  I don’t have to tell all of you, but it’s hard out there.  Maintaining even prayer can be difficult, but it is most essential during these times.  Pray whenever you can.

I was awakened in the middle of the night the other night with a picture in my head.  It was this one;

This picture was taken in April when we had no public Masses here.  The incense never rose and just sat in a straight line below the Monstrance.   Our prayer not rising to the heavens, as if God was saying, “no I cannot hear you, you have removed worship of me.”  In my startled state of being awakened, the Lord simply said, “it’s about worship.”

Those passing by reviled him, shaking their heads and saying, “You who would destroy the temple and rebuild it in three days, save yourself, if you are the Son of God, [and] come down from the cross!  Likewise the chief priests with the scribes and elders mocked him and said, “He saved others; he cannot save himself. So he is the king of Israel! Let him come down from the cross now, and we will believe in him.  Matthew 27:39-42

For those of us who are blessed enough to be able to go back to Mass, we have seen hand sanitizer put on the altar at the third elevation and vigorously rubbed on hands as a display for all to see.  A distraction from our Eucharistic Lord, as if to say, “Behold the Lamb of God and Hand Sanitizer.”

“What sorrow awaits you teachers of religious law and you Pharisees. Hypocrites! For you are so careful to clean the outside of the cup and the dish, but inside you are filthy—full of greed and self-indulgence.” Matthew 23:25

I have even been told that an unmasked “Amen” will cause droplets of virus to spread.  The proclamation of “truly” I believe in the real presence of Our Lord is cause for suspicion of sickness.

And they took offense at him. But Jesus said to them, “A prophet is not without honor except in his native place and in his own house.”And he did not work many mighty deeds there because of their lack of faith. Matthew 13:57-58

To be clear, there is sickness, it is real and it won’t go away until we get to the heart of the matter and turn back to God in repentance.  We can use the means of men, by using masks and hand sanitizer but they are not Our Savior, and until we admit our wrongdoing we keep the Savior from saving.

We have seen abuses for years, it just becomes more pronounced now, and many faithful are left feeling like this;

Trying to be reverent and repair for the abuse.

I was feeling tired and beaten down.  I was trying to be grateful, trying to be thankful, but I was failing.  The worlds darkness seemed to be taking over.  And as if the Lord knew what I needed he sent a messenger to reignite my hope.

My friend Brad Schepisi from Laudare.org sent out a message inviting people to go to the Shrine of the Most Blessed Sacrament in Hanceville, AL.  It was just what I needed.

For those of you who don’t know, the Shrine was built from a Mystical experience Mother Angelica had with the Divine Child.  He told her, “Build Me a Temple and I will help those who help you.”

Statue of the Divine Child outside of the Shrine

Anyone who has ever been there knows Mother listened to the Divine Child.  This is a place of beauty, reverence and awe.  Adoration takes place throughout the day.  Confession is offered daily as is Mass.

I was always struck by the fact that it was the Divine Child who held out his heart to her.  But in these days we live in it makes complete sense.  You see, those people who say that Jesus can take care of Himself are correct, He can.  But that isn’t how He chose to come here and do things.  He came as a vulnerable child and placed Himself in the hands of Mary and Joseph, who would never have expected Him to take care of Himself as an infant child.  They did their part in caring for Him and making sure He was not abused, fleeing to Egypt when His young life was threatened.  He came to teach us to cooperate with Him, to cooperate with true love, not so He could be the only one loving.

I arrived at the Shrine around 10:00 a.m. and just prayed in adoration.  I prayed for our Priests, our country, my family and friends.  I just prayed in the silence.  The silence only broken by the Poor Clare’s reciting the Rosary from behind the cloistered wall before Mass.

During the Consecration at Mass I had a moment.  A moment in my head where I felt as though Jesus showed me a timeline as seen through the lens of the Passion, in relation to the Mystical Body of Christ.   The Passion of the Church, the Bride of Christ was how it was relayed to me.  I felt as though the Lord was showing me all of the times that people professed his name and were members of the church, but they were harming His body.

The early church heresies were like the scourging, Arias and others ripping chunks from His body.  His eye pummeled and beaten by Henry VIII.  Luther pulling his arm from the socket.  We’re now entering into the suffocation of sex scandal and idolatry.

But soon the Lance will pierce our hearts and living water and blood will pour out over all of creation.  We will be converted to the true Pastor and Bishop of our souls.

And so I sat grateful looking up at God instead of down on humanity.  I got up to leave Mass and ran into Mary Pat, Joel and Ann and their friend who are in my Diocese and are lovely faithful people.  It is so edifying to see the light of faith in others.  I headed off to lunch.  I ate lunch with new friends Brad, Blaine, Marge and Cody, and again was strengthened by these people of faith all around.  After lunch as I was headed to the bookstore I ran into Jesus;

Actor Jonathan Roumie who plays Jesus on The Chosen

For those of you who don’t know, there is a new series called The Chosen.  If you haven’t watched it you should.  It is an actual series based on the life of Christ.  It does of course take liberty with the story, but remains as true to the historical context and scripture as it can.  It has brought me to tears and made me to know that miracles are real.  I told Jonathan I had binged watched the series twice.  He opened his jacket and his shirt said, “binge Jesus.”  I laughed out loud.  Indeed, if we binge on anything we should binge on Jesus.  I was like a star stuck geek.

What a blessing to be reminded of Jesus Christ by the actor who plays him.  Who knew Jesus was Catholic? lol.  He speaks openly of his love for the Eucharist.

After meeting him I went outside to head to the Crypt Church where Mother Angelica is buried. 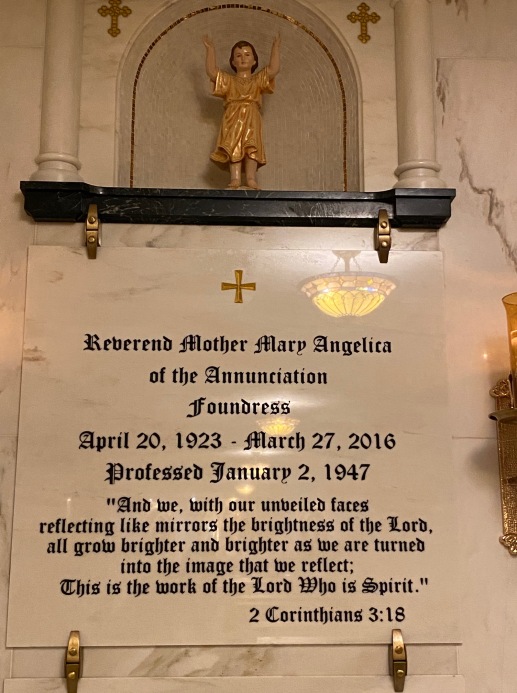 As I headed outside I could see a wicked storm brewing.  Lightening was flashing all over.  I headed down to the crypt quickly.  Because of COVID almost every activity has been moved to the upper church so when I arrived at the Crypt, no one was there.  I went and sat down and prayed alone.  The storm was so wicked the lights in the crypt were flashing on and off.  I felt like I was truly in a tomb as a storm raged outside.  But I also felt safe in this tomb, totally surrounded in an armor of protection and knowing that a perhaps future Saint in Mother Angelica was there with me.  Being in the tomb, the place where we die to self and hand everything to God because He is the keeper of the storm.  I trusted.

As the day came to a close I said goodbye to friends and I drove away knowing that God is good, all the time, even when we can’t always feel it.

Be blessed out there.

I am a mother and wife as well as an RCIA and Adult Faith Formation catechist at a parish in the south. I have 3 children and a great husband.
View all posts by veilofveronica →
This entry was posted in Catholic and tagged Liturgical Abuse, Mother Angelica, shrine of the most blessed sacrament. Bookmark the permalink.

18 Responses to Build me a Temple