Posted on January 20, 2017 by veilofveronica

Then I heard something like the voice of a great multitude and like the sound of many waters and like the sound of mighty peals of thunder, saying, “Hallelujah! For the Lord our God, the Almighty, reigns. “Let us rejoice and be glad and give the glory to Him, for the marriage of the Lamb has come and His bride has made herself ready.” Revelation 19:6-7

In my past post I spoke of how my Spiritual Director told me that the Saints in heaven, when God asks them to do something, they do it joyfully, immediately, and fully.  I told all of you that I looked at my past and I saw how when God asked me to do something I did it with complaint, put it off, and half way.  I told you I was going to reform myself.  I am here to tell you I am a giant failure.

Within a week of writing that post I was in adoration.  I was praying for a friend. Sometimes when I pray in adoration, if I am alone, I will lay prostrate in front of our Lord in the Monstrance .  As I lay prostrate on the floor in front of the Monstrance, I could see my hair fall all around me.  I very clearly heard the Lord say, how long have I been asking you to cover that up in deference to me?  I told him, probably 4 years.  He then asked me to make the sacrifice and to show the beauty of a woman in a world that so distorts what womanhood is.

I have read all the reasons why women veil.  I have come across article after article.  I have always had great respect for it.  But it wasn’t for me.  I go to a church that has a beautiful Novus Ordo Mass.  In a large congregation of 2200 families, most of the women do not veil, maybe I will see one at a weekend Mass.  Because I work in the RCIA ministry, I have always justified that I need to look “normal” for those who are not used to Catholic traditions.  And plus, I really like my hair.

So here was God asking me, just after I proclaimed I would be immediate, joyful, and full, to cover my head in Mass.  It is a sacrifice for Him and for others is what he told me.  So what do I do, I tell the Lord, why yes, I will do it.  And then I leave adoration and immediately begin bargaining with him.  Does it have to be THIS weekend Lord?  How about a cute hat Lord?

What I wore to Christmas Mass. My husband told me I looked Russian.

No one else is wearing a veil Lord, I will look like a weirdo.  People will think I am trying to be holy, when I feel completely not worthy Lord.  You just want me to look like a holy roller.  The thing is, I never looked at people who wore veils that way, so why was I thinking it for myself?  In fact I admired people who wore veils.  Here I was complaining, putting things off, and doing things halfway.  I recognized immediately what I was doing.  I got so mad at myself.

I think God was also hitting me in an attachment, an attachment to vanity.  Stop taking selfies of yourself in a hat Susan and order a veil, he said to me.  My husband asked me how many hats I was going to buy when the fourth one showed up at the house.  I had ordered a veil, but it was going to take about 5 weeks to get here, and the veil at the bookstore, well I bought it and didn’t wear it.  But when my ordered veil finally arrived, I thought,  I cannot fight God any longer.  So yes, you will see me in my veil, not feeling holy, but unworthy, but in everything deferring to my Lord. 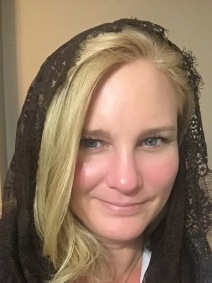 My friend Allison told me with a blog named Veil of Veronica, how could I possibly think I wouldn’t end up in a veil.  So with that, I won’t make you indulge my selfies after this.  God tells me to stop focusing on myself, and focus on others.  I’m trying Lord.  I really am trying.

I am a mother and wife as well as an RCIA and Adult Faith Formation catechist at a parish in the south. I have 3 children and a great husband.
View all posts by veilofveronica →
This entry was posted in Catholic, Uncategorized and tagged Catholic, Faith, Mass, tradition, veiling in church. Bookmark the permalink.

29 Responses to Joyfully, Immediately and Fully