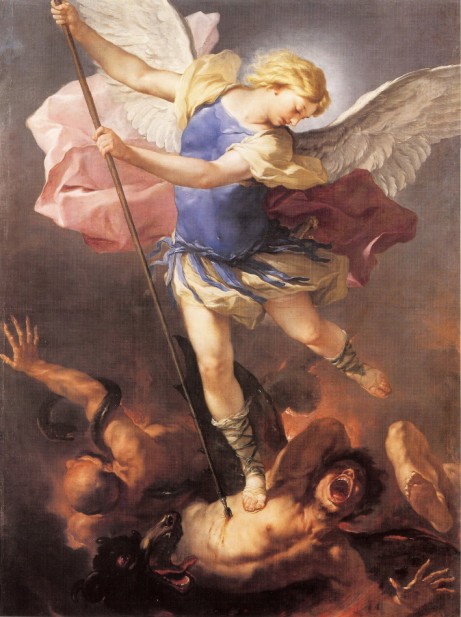 “Real love involves real hatred: whoever has lost the power of moral indignation and the urge to drive the Sellers from the Temple has lost a living, fervent love of Truth.” — Venerable Archbishop Fulton Sheen

A few months back I posted the above quote from Archbishop Fulton Sheen on my Facebook page.  I was immediately barraged for promoting hate.  How could I post something saying real love involved real hatred?  Over the course of the discussion, it became increasingly clear that our culture has white washed Jesus Christ into a nice fellow and misinterpreted much of the Gospels.  Turn the other cheek seems to mean, don’t stand up to evil.  That is not at all what Jesus taught.

The reason people have come to believe this false depiction of Christ is because we as a society no longer believe in the Spiritual World, or in sin.  As C.S. Lewis pointed out in the Screwtape Letters, the greatest accomplishment of the devil was convincing us that he wasn’t real.  But he is real.  And until we recognize that, we won’t know who we’re fighting, or how to fight intelligently.  If we don’t believe the devil is real, or in sin, and everything is relative to our particular situation without absolute truth, then we cannot condemn atrocities that happen around us.  If I have no truth, then murder is acceptable, as it seems to increasingly be in our society.  The greatest fallacy of moral relativism is that it states as absolute truth that there is no truth.  It contradicts itself.

It may be hard for some to believe, but God Himself instituted Holy Hatred.  This hatred is not to be aimed at people, but at Satan.  When Satan tempted Adam and Eve in the garden it was Satan who was the very first cursed and here is what God said;

I will put enmity between you and the woman, and between your offspring and hers; They will strike at your head, while you strike at their heel. Genesis 3:15

That word ENMITY, that is a true hatred, an active hatred.  It isn’t passive.  And God himself placed it between us and Satan.  GOD TOLD US TO HATE SATAN.  This is HOLY HATRED.  The fruit of Satan’s work is our sin, so we must also HATE SIN.  Until we understand this, we are not fighting our battles intelligently.

The war we are in is Spiritual.  We must not hate people.  We know from being in covenant with God, that we have exchanged enemies.  God deals with the people and our enemy becomes Satan.  We do not battle Satan the same way we battle people.  How do we battle Satan?  With the sword of the Spirit;

Those sound like harsh words from Jesus, but what did he mean?  The sword he speaks of isn’t a literal metal sword;

“For our struggle is not with flesh and blood but with the principalities, with the powers, with the world rulers of this present darkness, with the evil spirits in the heavens….

And take the helmet of salvation and the sword of the Spirit, which is the word of God.  Ephesians 6:12 and 6:17

Here we see Saint Paul spell it out for us, it is the Sword of the Spirit because we are fighting Powers and Principalities.  It is worth reflecting on that whole verse from Ephesians.

What does this mean?  How do we stand up to evil?  First and foremost, we PRAY.  But we also can actively combat evil by not budging when it confronts us.  This does not mean we act violent.  On the contrary, because evil often manifests through people, we must be non-violent.  We must let God deal with the people and recognize that they are listening to demons who speak to them.  This enables us to love the person, truly love them, to the point we can forgive them, and to hate the demons who speak to them.  We must TRUST GOD that our prayers in alignment with His will and His truth have efficacy.  What does this look like?

It looks like Mother Teresa, who when she asked for bread for a hungry child and the baker spit in her face, she said, “Thank you for that for me, now what do you have for the child?” She did not attack when violence spit in her face.  She did not run away when sin came at her.  She stood her ground in love.  And the child was fed.

When evil came for Jesus Christ, there were many things he could have done.  He could have gone the way of the world and betrayed the Father, like Judas did.  He could have fought back, like Peter did when he cut off the ear of the soldier.  He could have run away, like all but one Apostle did.  But he didn’t do these things, because He was one with the will of the Father.  When evil came for Jesus Christ, He stood in the way.  He knew who His enemy was, and he had a Holy Hatred directed toward His enemy, and True Love directed toward us whom He is in covenant with.  Evil thought he was destroying Him, but the love in Christ’s heart would bring Victory for us.  He didn’t change the truth of what he said.  He took on death that Satan had brought to the world.  And he died for us on the cross.  And this brought Resurrection, because Jesus was teaching us how to fight intelligently.  We do this by totally Trusting God.  Totally loving people.  And totally hating Satan and sin.  Take back your authority from the devil and hate him, and not the people he is whispering to.  Forgive the people Satan whispers to and put your hatred on Satan.  This is how we defeat our enemy.

They don’t know who is whispering to them because they don’t know Truth, who is Christ Himself.  We must live as a light of Truth with Christ in us.

The picture above of Saint Michael, that isn’t passive dislike.  That is enmity.  He put Satan under his foot because he embraced the Holy Hatred God gave us, and thus shows us how to usher in true love of one another.

Pray, fast, receive the Sacraments Christ left us and stand your ground against evil.  Heaven will be your reward.

We can all pray together for Peace through Strength, which we find in the power of God.

I am a mother and wife as well as an RCIA and Adult Faith Formation catechist at a parish in the south. I have 3 children and a great husband.
View all posts by veilofveronica →
This entry was posted in Catholic, Uncategorized and tagged Blessed mother, enmity, holy hatred, Jesus, Saint Michael. Bookmark the permalink.